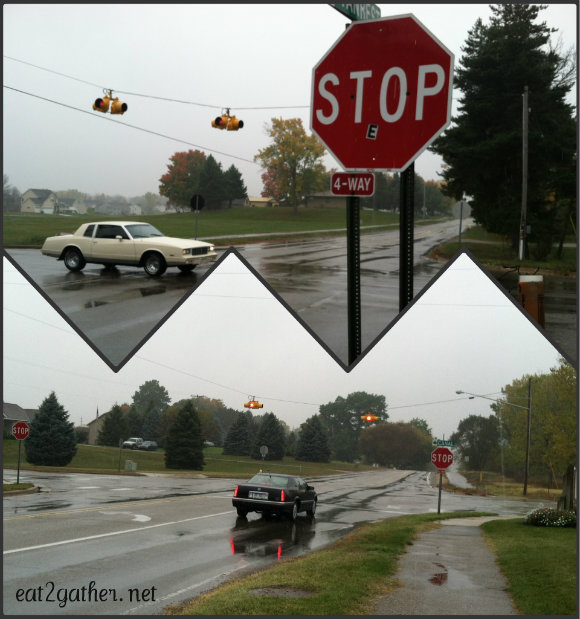 My oldest son just finished Drivers Education.  So now 27 years after I started driving I  get a refresher course on the rules of the road, BUT and that’s a big BUTT, I get to use my knowledge of road rules from the passenger seat because  I now have a chauffeur!  For the next few months I get to have my son drive me everywhere.  It’s amazing.  Did I say amazing?  I meant alarming.

Do you have a child that is going thru drivers ed, or is already driving?  Can you feel my pain brothahs and sistah’s?!

This chauffeur thing can be handy….but it’s mostly maddening. The only handy thing about it is that I can check my emails, or  text.  No need to shut down the communications, and social networking, now that I have a chauffier.  Right?

According to the Driving Instructor, we as parents need to be alert and watchful at all times.  We are now our childs encourager and driving instructor on a daily basis.  Boo.  This is where the maddening part comes in.  The most worrisome aspect, for me,  is the loss of control…and well the patient, encouraging parent/driving instructor part.

Soooo…what was I talking about?

1. NO ONE is paying attention when they pull up to the stop sign.  Who was there first?

2. Everyone is stopped, no one goes, but then drivers start edging out.

3. Drivers wave people through when it’s not the other drivers turn, it’s the wavers turn!  But because they were not paying attention, and don’t know it’s their turn they decide to be polite and nicey nicey and wave the other cars through until they are alone and then they are sure that it is in fact now their turn.

4. Drivers barely stop and go out of turn.

5. Drivers don’t stop at all they…well they quite literally run the flippin four-way stop, because everyone is stopped and they are in a hurry so on they go…barely giving the brakes a tap.  “I’m more important people, so don’t move I’m barreling on through!”

What should happen?  Do you remember the rules/etiquette?  I did not.  To be honest, much to my complete and utter embarrassment, I will admit that I have been guilty to all 5 counts of poor 4-way stop rules/etiquette. 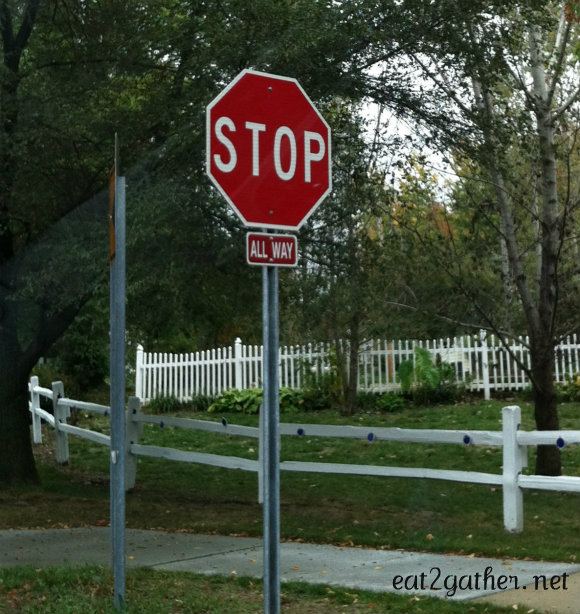 1.  Stop completely.  Notice as you are coming to a stop, are there other cars already stopped.  Who stopped first.  Did anyone approach at the same time? (This one gets my armpit irragation system a-flowin’.)

2. Vehicles should leave the stop sign in the order they arrived.  It’s just like getting in line only you are all facing each other…awkward I know, but it’s life deal with it!  First one in line gets to go first.  NO CUTS.

3. Back to vehicles arriving at the same time.  This is usually where the courtesy wave comes in.  The rule for more than one vehicle arriving at a four way stop at once is a head spinner.  Call me simple, but….well here you judge for yourself.

RULE: The vehicle furthest to the right is allowed to leave first.

Scenerio 1 – If two cars arrive at the same time and they are perpendicular to one another, meaning side by side, the driver on the right has the right of way.  Here is where my brain, kinda whacks out, your basically in in a circle right?  So if we are the only two cars at the intersection then aren’t we at some point both on each others right sides?? I know, I know….it’s just how my brain works.

Scenerio 2 – If two cars pull up across from each other a the same time the car that is turning left needs to yield to the oncoming car.  This is where turn signals come in handy.  USE YOUR TURN SIGNALS PEOPLE.  Most of the driving population are not mind readers!

Scenario 3 – Three of four possible cars arrive at the same time.  Doesn’t happen very often but it does occasionally happen.  Hand waving kicks into high gear at this point, because no one knows the rules.  Which would be if they happened to all be going straight the car furthest to the right goes first….now if some are turning and some are going straight, well we could be here all day figuring that one out.  Use your signals and your “to the right” rule and your noggin and it will all work out, eventually.  I promise.

One of then four-ways near my home is known as the Dutch Stand Off.  If you are from West Michigan, you might be able to understand the reason for this name.  If you are not…hmmmm how can I explain this?  There are skads of people of Dutch descent in this area.  These people are known for their upstanding morals, stricked Christian Reformed back ground, polite dispositions or passive agressive behaviors….call it what you like.  So when four Dutch people arrive at a four way stop at the same time who goes first?  NO ONE. Bahaha haha!  No seriously folks that was not a joke…….they nod and wave, and nod and wave, and smile and nod, and wave.  Then the dark featured German/Irish girl (that’s me) pulls up to the Dutch Stand-off… and it’s not purdy.  This is called a drive by dutching. Pah-waaaM-eee I’m outta there!  Oh I wave….as I’m blowing through the stop.  But I gots things to do; people to see; grocieries to buy; undies to fold!  Enough all ready!  Learn the rules all you people of Dutch decent, and well a little aggressive behavior may come in handy too.

This is bad bad bad behavior.  I confess.

I could go on all day with an a variety of 4 way stop sitch-ee-Ay-tions…….but I think you get it.

Recently I got to ride along with my son on his final driving exam.  Kids these days have to go through so much more to get their license than we did.  It was stressful let me tell you.  I just about ask the Driving Instructor if we could end our test at the bar.

Tip: (These drivers ed tips are free so listen up!  Cause nothing else about your kid being able to drive is!!!)  When scheduling your childs road exam try to be aware of traffic flow in your town, and make the appointment at  non-peak hours.  Until my son and I were driving to the appointment in bumper to bumper traffic at rush hour, and I was sweating my buns off and stressed out, it didn’t occur to me that I might have wanted to make Noah’s appointment at say 3 am.  You have to know my Noah he is always calm as a cucumber….he says to me “Mom this might not have been the best timing.”……all you could hear from my side of the car was the sound of my sweat dripping off my elbows onto the seats.  (Now if you do not perspire heavily, that last sentence will make no sense….but if you are a sweaty Betty, like myself, you will be saying mmHmm Amen.)

another Tip or two: Keep your eyes closed….but act normal.  Be friendly, and chat with the driving examiner about the weather, and  baseball.  Sit on your hands so you aren’t tempted to throw them in the air in front of you in an act of self defense.  Don’t gasp loudly when your child comes up fast on a city bus….that’s stopped.  Keeping the eyes closed at all times will prove to be your best bet, then you will not know what they heck is going on…out of sight out of mind.

So section 1 was completed last October, Section 2 was completed this summer, and the road test was passed with flying colors….so now we wait, and continue to patiently encourage and teach as we are chauffeured around until December 30, at which time I will hand keys to my eldest, my first born, the fruit of my womb.  I will  send him out into the world of four way stops all by himself.  Ugh.

I have to admit, I never really understood the the crying moms, on the first day of school thing.  But the handing my first born a set keys and sending him off into the great unknown….now that there is worth shedding a few tears over.

Help me Rhonda!  Calgon take me away!  Wah where did the time go…my babies dwiving. 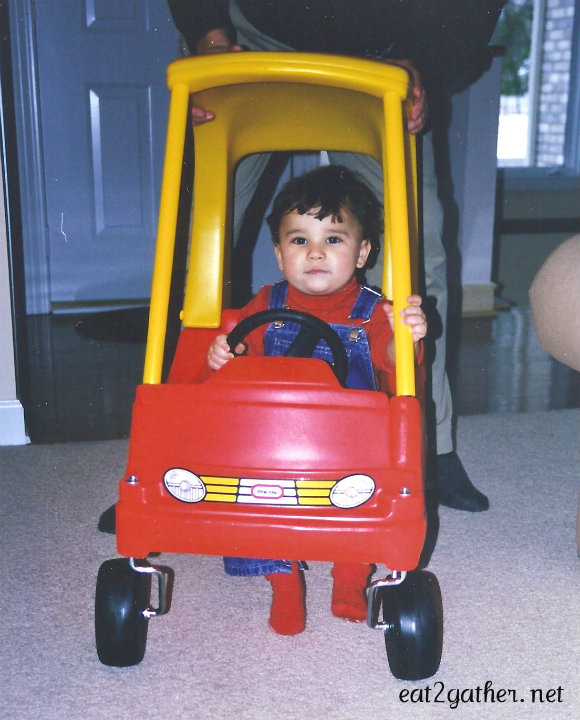 Noah’s first car…those were the days, when all I had to worry about was making sure he didn’t tumble down the steps in his Cozy Coupe.