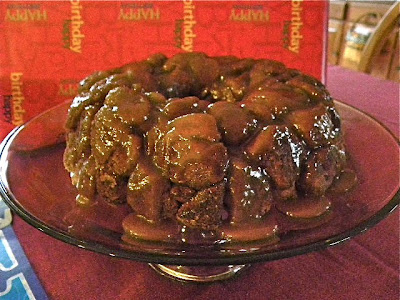 It was a busy week last week, both my boys had birthdays! Sandwiched between Christmas and New Year that makes for ALOT of eating and celebrating! I try to spoil my kids rotten when it comes to what they want to eat on “their day”. Breakfast, Lunch, and Dinner…..the skies the limit. Tuesday was Luke’s birthday he turned 11, he requested homemade donuts for breakfast, and fried chicken for dinner. Like I said, “the skies the limit”. So when Noah (14), who’s birthday was Thursday, said he would like Monkey Bread for his birthday breakfast, and take-out pizza for dinner. I kissed him, and hugged him, and thanked him, until he said, “MOM alright already!” 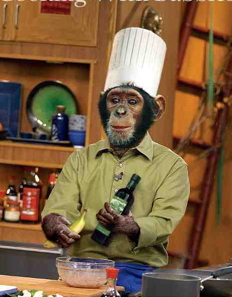 This recipe is so easy EVEN a monkey could make it! I love my Monkey Chef!
Monkey Bread
printable recipe
3 cans of Pillsbury buttermilk biscuits
2 sticks of butter
1/2 cup brown sugar
1 teaspoon vanilla
1 cup of granulated sugar
3 teaspoons cinnamon
Preheat oven to 350 degrees 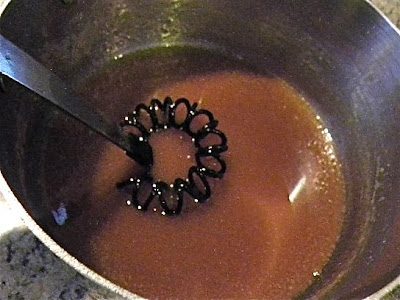 Melt 2 sticks of butter in saucepan with 1/2 cup of brown sugar, over medium heat. Stir until the butter and the sugar have become one, this takes about 3 minutes. Remove from heat. 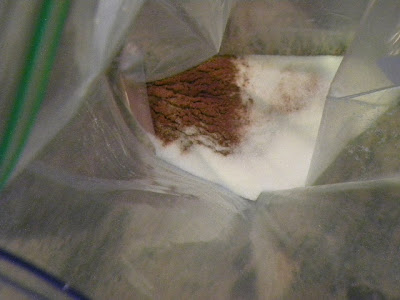 Add 1 cup of granulated sugar and 3 teaspoons of ground cinnamon to a 1 gallon Zip-loc bag, toss it around so the sugar and the cinnamon become one. 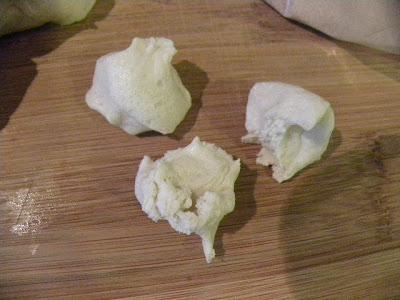 Now take your cans of biscuits, and peel back the paper on the can that allows you to let the biscuits out of their tubular dwelling. Now here is where things get scary.…if you’re jumpy like me. It NEVER fails, when that can pops and the biscuits Boing out of their tubular home, I ALWAYS jump. AH! Why is that. I know it’s gonna pop, I know it’s just biscuits. But I always jump.
Confession: I jump when the biscuit can pops open. It ain’t gonna change people.
Sorry, you can leave now and never come back if having revealed my freaky character to you is totally disturbing. I understand.
So after I jump and yelp “AH!”, I then take the biscuit dough and divide each biscuit into 2 or 3 parts. I like to mix it up. Give the bread some textural variety. Some pieces will be more caramelly and others will be more bready, if you do it with varied size pieces of dough. Or if you like things orderly and you want all your pieces the same size then that works too! 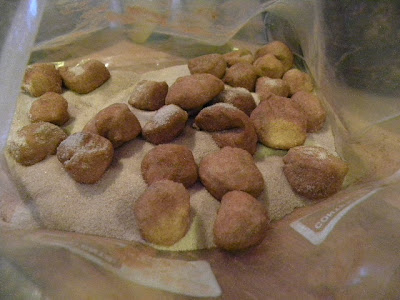 Toss the divided pieces of biscuit dough into the sugar. I do one can at a time. Zip up the bag give it a shake, then I add the next can of biscuits, until all three cans have been added and shaken and completely deliciously covered with cinnamon sugar. 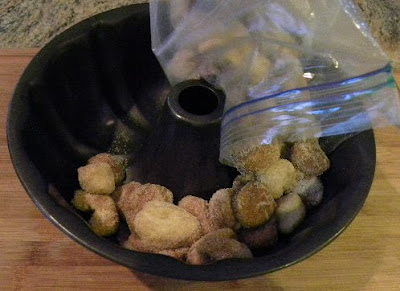 I use a nonstick Bundt pan…..you can use any ring shaped pan. Dump the entire contents of the biscuit dough and cinnamon sugar into the pan. No need to grease the pan. 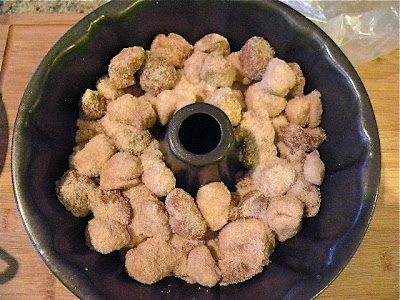 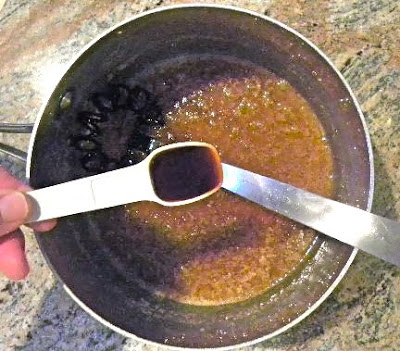 Now whisk 1 teaspoon of vanilla into the brown sugar and butter mixture. 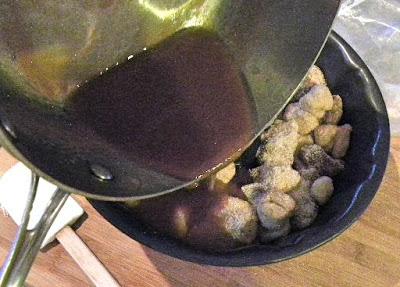 Pour evenly over the biscuits. Bake in a 350 degree oven for 35 minutes. Remove from oven, and let rest for 5 minutes, then place a plate that is at least 2-3 inches wider in circumference on top of pan and invert your Monkey Bread onto the dish.
VOILA! 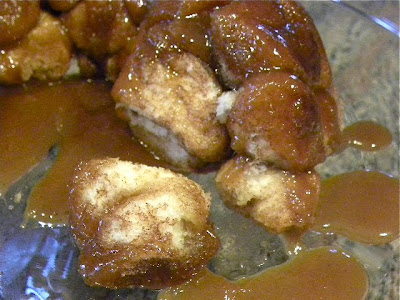 Delicious OOOey, gooEY Monkey Bread. Fit for any birthday breakfast! Or really any day of the week.
Enjoy!