AMENDMENT: made at 11:52am for those of you, who may not want to read any further. COMMENT on this post to win SIGNED copy of The Pioneer Woman Cooks!

I wanted to make this recipe earlier, but I was trying to strategically plan the meal into our family schedule, when we would not be around too many people. Well that would be… NEVER. School, church, work, meetings, sports, working out at the YMCA. These are all places that…. well, you want to be flatus free.

Yes, I did just say the F word… 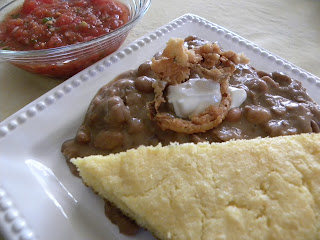 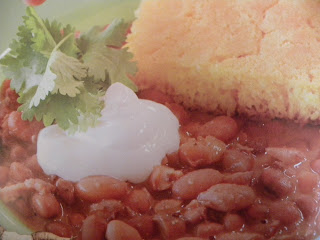 Last night I made the Pioneer Woman’s Beans and Cornbread. (Mine is on the left and Ree’s is on the right….can you tell. I know, hers looks so much better than mine!) I also snuck in the Onion Strings, and P-dubs Restaurant Style Salsa…onions, salsa…as long as we were gassing up I thought we might as well top of the tank.

“The farters” AND “The people who act like they don’t fart”.

In his mind there is a big Ol’ line drawn between them.

Oh, you didn’t know this about my husband. Yes, it’s true…he takes no offense to someone “letting it rip” around him. In fact if you do….you are “in like Flynn” with him. Don’t get me wrong he does have some manners, he knows when to contain himself…for the most part. Although, I have had to give him the nasty eye a few hundred times in our life together when we are out in public. 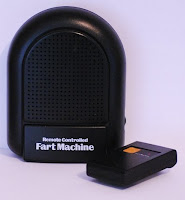 One Christmas Kenny received 3 fart machines…..it must of have been the first year they came out. Everyone who saw it, bought it for him…they knew he would love it! He has probably received 3 more since.

One year we went to a White Elephant Christmas gift exchange party. Maybe you have gone to one, everybody brings a wrapped present and then there is some sort of method to getting a gift and taking one from another person….I can’t remember the exact rules. Most of the night is spent passing gifts around and then at the end you finally get to open whatever you end up with in your hands.

My husband wrapped the noise making part of the fart machine in a pretty little box, and put the activation button in his pocket. So who ever had the package would get a surprise. It was really quite funny, to watch people give the person next to them a sideways glance or a disgusting look and then walk away. Sometimes you could tell that they thought maybe they had let one slip, they would take a glance down at their stomach and look around all nervous. Ken would also time it just perfect, as someone was walking passed the holder of the “package” he would hit the button and they would give the passerby a startled look. Oh I think this was the best night of Kenny’s life. If he tells the story he laughs so hard he cries.

You just gotta love him….it’s the simple things in life that make this man of mine happy!

Do you have this book? 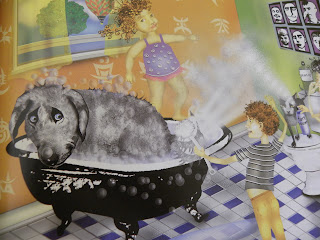 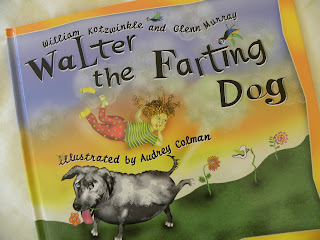 Walter the Farting Dog, by William Kotzwinkle and Glenn Murray/illustrated by Audrey Colman. Well of course my kids have it. We have been given many books that have to do with bodily functions over the years…yes quite an interesting library my children have to choose from. If you are into this sort of thing, or have friends that are, this is a very sweet book about a dog that gets adopted into a family but they can’t stand his stinky toots, and are ready to give him back…until Walter saves the day with his rancid rancor! It’s a must read…really…it is.

We do have a jar of this on hand…given to us of course by a well meaning friend…maybe we should give it a try. 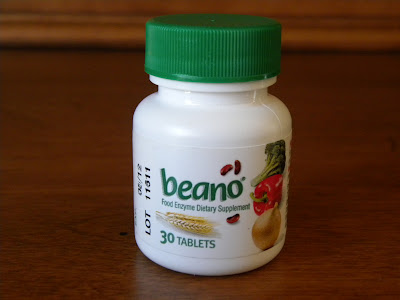 Now I will leave you with a little diddy we sang as kids, and I have since passed (no pun intended) on to my children..

This post was not intended to offend anyone…but if it did well then I guess you are on the other side of that big Ol’ line!