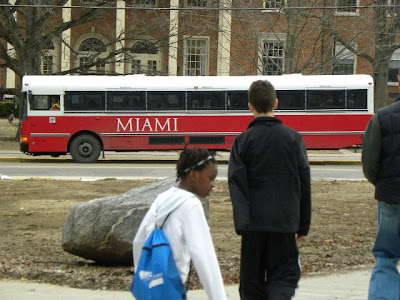 Walking around campus of Miami University.

Well it’s been quite a day. We started it out in Oxford. Where we stayed the night after Kenny showing us all old haunts and former residences while in college. We ate pizza at Bruno’s and bought t-shirts at the bookstore, and ended the night out at BTOyogurt! We stayed at the Holiday Inn Express in the middle of Oxford, which was a great location, until the bar fights broke out at 2am, then my kiddos got a lesson in inebriated undergrad vocabulary. Hopefully my eight year old isn’t scarred for life. 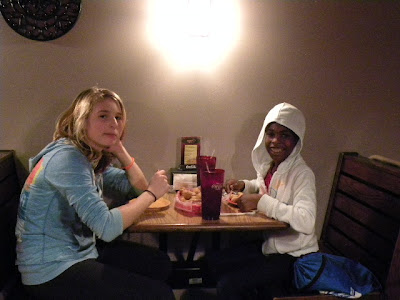 After a quick recovery, the next morning, we grabbed some grub at a a local restaurant…that no one can remember the name of. It has a purple awning. They had good oatmeal. Sorry I was suffering from hangover by association with the drunkards that kept me awake half the night.

Cincinnati here we come! We drove straight to Joseph-Beth Booksellers, so I could get a line letter for Ree Drummond’s Black Heels to Tractor Wheels book signing. I received the letter M. (M for Munchy Mouth) Better than I expected, when I heard they had started handing out line letters a week ago, I thought we didn’t’ have a chance in H. E. double hockey sticks! of getting in line for P-dub.
Then we decided to take in the sites of Cincinnati. It was a great day for a walk, 60 degrees and sunny! Who woulda thunk it, on February 18! So we are just walking around minded our own beeswax when what before my wondering eyes should appear but George Clooney and Ryan Gosling! (of The Notebook fame) They were filming a movie in a walkway over the street. So NO I did not exactly rub elbows with George and Ryan, but I saw them in the flesh. I love it when that kinda stuff happens! And yes they are CRAZY hot, especially when they are suspended above me like such….. 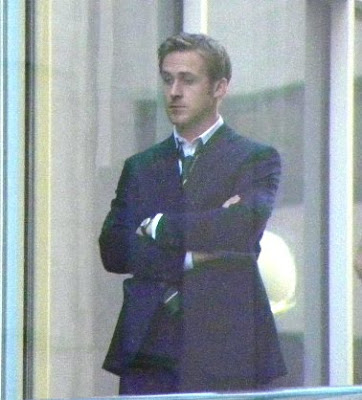 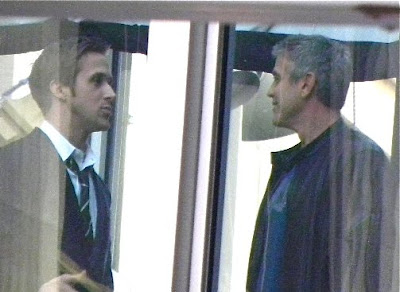 One time Dennis Rodman stepped out of a car, in Chicago, right in front of my sister and I. He was so close we could smell his cologne. That dude is big and bad lookin. Not the someone I was later wishing I had spontaneously hugged or something. Now Ryan Gosling, I might have spontaneously hugged! The weird thing about that night was that my sister and I were walking back to our hotel, and we smelled brownies…..we were bound and determined that we were going to figure out where that smell was coming from. We never did find the brownies. Dennis Rodman’s strong cologne kind of knocked us off track.
I twittered our food adventure. Skyline Chili, Graeters Ice Cream, and then PF Changs was the plan. Well, we hit the first two, but ended up fore going PF Changs for fear that we would miss Ree. (Ree I luv ya so much I gave up PF Changs! That’s big Darlin.) So we ate in Bronte’s which is a restaurant in the bookstore. It was decent. We were all pretty starved by he time we finally ate so it could have actually stunk…but we were too hungry to know it! 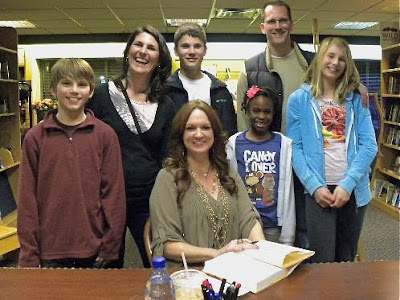 Ree and the Johnson’s.
(This is the only picture I’s got. My only disappointment of the trip. I should have told the lady I handed my camera to to be a happy snapper. I look like a big dork..I know.)
They called letter M while we were eating so when we got done the line manager lady plopped me in line. And there I stood, heart thumping, books and camera in hand, texting like a maniac trying to get my family to get their booties up stairs where Ree was signing books so when I got to her they could quick sneak in a picture, without hogging a whole lot of space in line. While waiting in line a twitter friend Outatfirst said Hi. It was fun to meet her…but I realized I forgot to ask what her real name is. So sorry. Glad you recognized me and I got a hug from ya, Sweet Girl!
So then the group of gals ahead of me had a whole song they had rehearsed for Ree…then it was my turn…….
My littlest had asked me no less than 60 thousand times during the day if Ree would recognize me when she saw me… I kept reassuring her she would definitely recognize me. But then all of a sudden…her question rang loud in my ear, “will Pioneer Lady recognize you mama?” and then I panicked thinking what if she doesn’t know me? And I have to explain to her who I am. Silly me! She did. She seemed taken aback a little, maybe it was the whole family descending upon her….maybe she was thinking gadzooks I can’t shake this girl...but I’m gonna think she was genuinely surprised to see me and excited to meet my family. I introduced my kiddos, and she gave each one of them a hug. Then told Kenny that he had to bring us all the to the Ranch sometime.
Sorry to say he took you serious Ree. We’ll be road trippin your way next week! 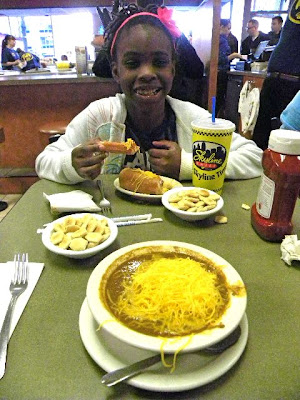 Skyline Chili, is where we ate lunch (after the hunk sitings and before the book signing), and had the sweetest waitress ever. The kiddos were less than enamored with Skyline. I’m glad I can say, “I tried it”, but I don’t think I will be craving it anytime soon. 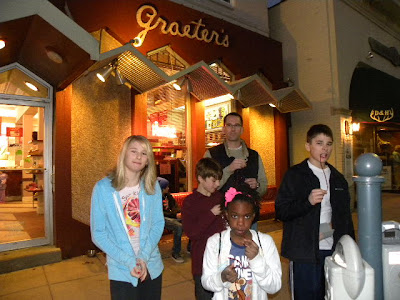 Now Graeters Ice Cream on the other hand……OH MY GOODNESS GRACIOUS!!!! Can you say DANG GOOD ICE CREAM? I had the Chocolate Mocha Chip..MMMhmmm need I say more?! 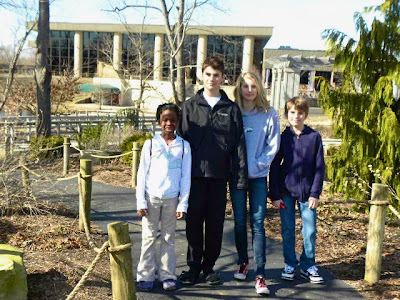 The Creation Museum was one of our main destinations on this trip. It is a few miles south of Cincinnati in Petersburg, Kentucky. The kids enjoyed it. It stirred up a good theological conversation in the car. We continued to discussed all the questions over our BBQ at….. 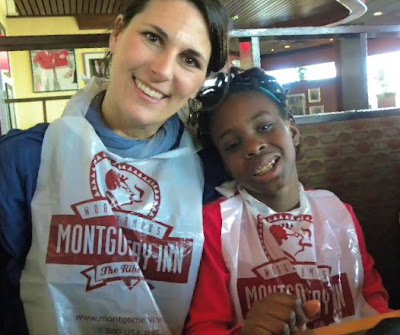 The Montgomery Inn’s Boathouse location, on the Ohio River. Thanks Kim for the great foodie recommendations! If you are in the Cincinnati area, and you are a lover of BBQ then you MUST give the Montgomery Inn a try, it was fabulous!

After our more than plentiful BBQ dinner we headed to the Premium Outlet Mall just north of town. We walked our dinner off and found ourselves a great hotel (Courtyard by Marriott) near the Ikea at the Mulhauser Rd exit 19. This is a great exit. Lots of nice hotels, a Starbucks, Ikea, movie theater, PF Changs….what more could a girl want?! All the boys wanted was to watch the NBA All Star game, so us girls ventured out for snacks and came back and chill-axed with the boys in front of the TV.
Sunday morning we arose to rainy, cold weather…no more sunny and 60’s. We headed to Ikea for a cheap breakfast…and to look for martini glasses for the up and coming Cowgirl Dinner Party, then we got on the road and headed homeward. 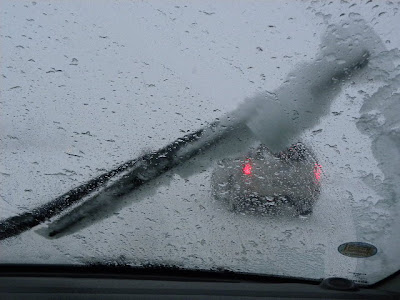 Unfortunately this is what our trip home looked like. It was quite a drive, 7 long hours(normally it would take 5+hours) in the van with the kiddos. I have to say they were very good. But it got quite stinky in there by about the 5th hour. Very thankful to be home safe and sound. If this wasn’t enough, you can read all the gory detail on my travel blog, when I get around to posting over there.

The kiddos have one more day off school today, and tomorrow it’s back to school! I think I might eat my socks and take my girls to the Bieber Movie today….EGADs did I just admit that? I know, I know…he’s a nice kid. I just pray he stays that way!
Hope you had a great weekend!
Luv Ya!