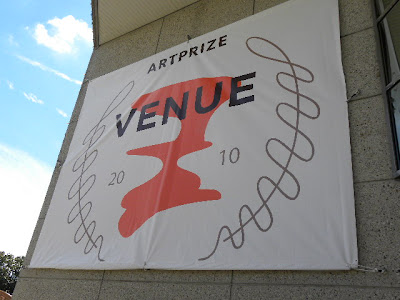 Wednesdays food for thought….have you been to ArtPrize? Have you heard of ArtPrize? If you are not an artist or from Michigan, then most likely you haven’t. ArtPrize is an international art competition. It is held right here in Grand Rapids, Mi!!! It is an open art competition that is giving away the world’s largest prize for art. One quarter of a million dollars! Yup, you heard me, a quarter of a million bucks! Prizes totaling over $400,000. That’s a nice prize.
Last year was the first year of ArtPrize. No one knew what the heck was going on in this town. It was crazy. Why would people come all over the world to Grand Rapids, Mi to display their art. Who’s going to do that? Well come they did. And they were from all over the globe. It was incredible. In the depressed economy of Michigan, we needed something to prize around here let me tell ya. If you are curious and want to know more about ArtPrize you can go here, because I don’t want to talk to much…I want to show you.
Monday, I was able to go with my youngest daughter on a field trip to ArtPrize. They are calling these field trips for kids, Artification. It was awesome! Many if not all of the artists were beside their piece of art, available to the kids for questions. And some gave demonstrations also. 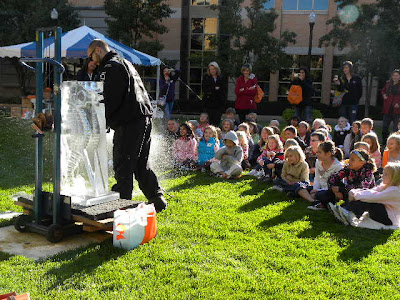 I did not do a very good job at getting all the artists names and information. So you will just have to enjoy the pictures. This was the Ice Sculpture guy. Carving a seahorse live for my daughters class. 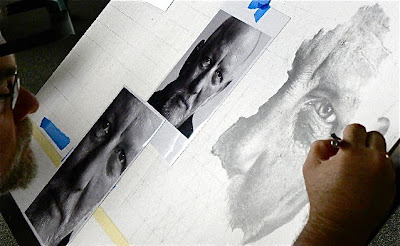 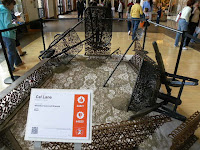 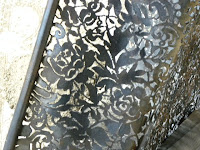 And look at the creativity in this. Wheelbarrows that have been cut like paper with beautiful flower impressions, and then the dirt on the floor mirrors the design in the wheelbarrow. Simply beautiful. 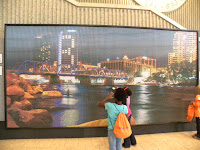 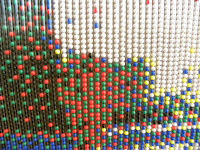 This is a scene of Grand Rapids at night. The Grand River with the JW Marriott and the Amway Grand Plaza Hotel in the background with the “blue bridge” in the foreground. All made out of paintballs. PAINTBALLS! I do not know how many paintballs they used, but his was a giant wall mural. Very cool, and the kiddos could touch it too. Bonus points for that. 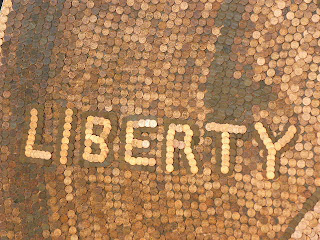 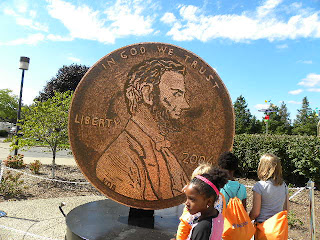 Giant penny, made out of pennys. A kid favorite. 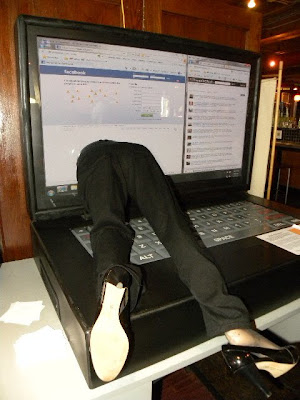 Now some might question the artistic ability in this piece. But I found it hilariously ingenious! 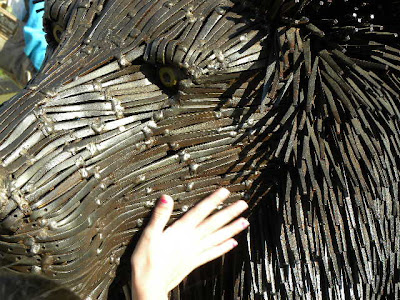 This artist was at ArtPrize last year with the Moose, which was a favorite. This year he did a whole pride of lions. All out of railroad tie nails. 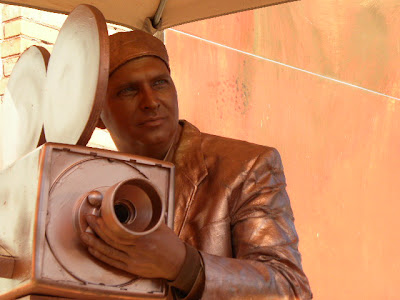 The human statue. He is from the Grand Rapids area. He has won international acclaim for his art of being a human statue. Another kid favorite. 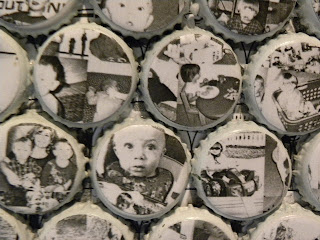 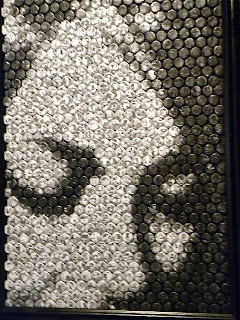 This is one of my favorites. The picture on the left, of a womans face, is made up of bottle caps, and the bottle caps have all different pictures of her children on them. The title was something like “parts of me”, I think….needed a notebook. Love this one! It was in the B.O.B. . 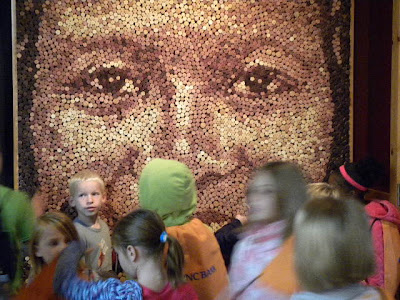 This was also in the B.O.B.. It was made out of hundreds of wine corks. It is titled “Grace”, it’s the portrait of a Rwandan woman that was separated from her family druing the 1994 Rwandan genocide. Amazing story…amazing art. 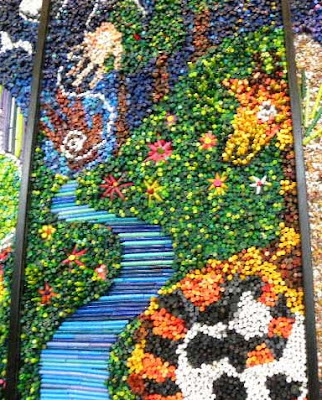 This picture only shows a portion of the mural, made completely out of crayon pieces. It smelled like a giant box of crayons in the lobby of the JW Marriott. 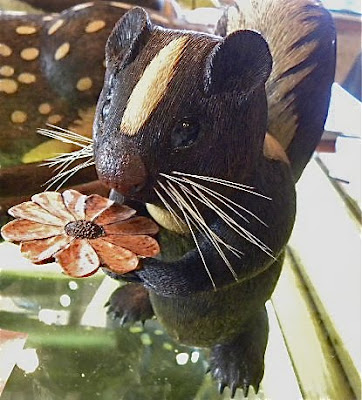 This little guy was in the B.O.B. so cute, carved out of wood. Reminded me of the skunk in Bambi. 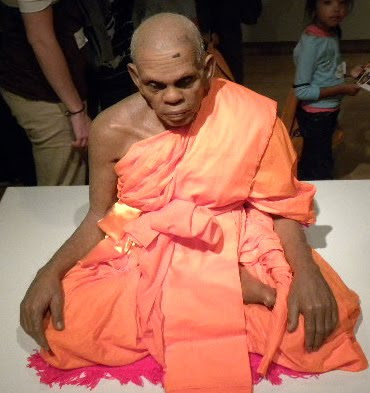 This is not real. It looks creapily real. Like this monk is going to jump off the table real. Hair in the ears, not a mole is missed. Really wild. 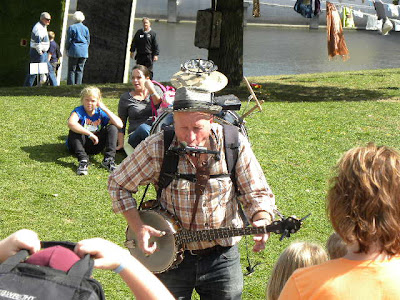 I had four little girls with me all day. We were pooped so we sat down to enjoy this one man band. It was a much needed rest and he was very fun to watch. I only touched the tip of the iceberg as far as entries. There is so much more to see. I am going back to ArtPrize tomorrow with a girlfriend. Would you like to see more ArtPrize art? If so I would love to share..let me know.