We have a dog. Jack. He’s a golden retriever. He’s a hairball. He’s constantly dropping his hair all over my floor, which drives me nuts. Kenny is allergic, and since we are brilliant people we chose a breed that sheds more than any other. Besides the hair and a few pieces of pizza and a scone or two being snatched off the counter I really have no complaints. He’s a good dog. He’s extremely laid back, but we think he has the brain the size of a pea. 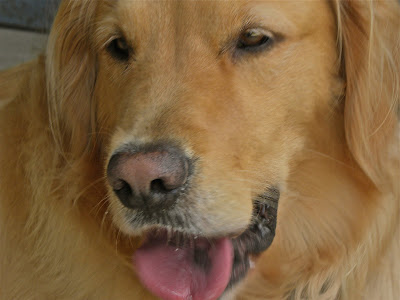 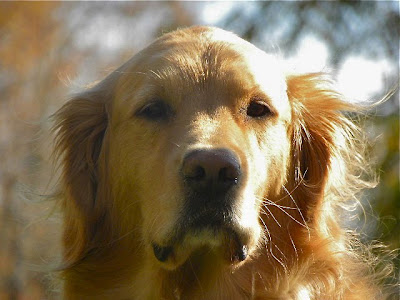 “I am regal, brave, and strong, I can stare down squirrels with my laser powers.”
This is what it looks like he is saying but honestly we have questioned what really, if anything goes on in that regal looking nogin of his. He’s a retriever, but he rarely retrieves. He will stand and stare up a tree looking at a squirrel for days, but he will not play fetch to save his life. He does love to bury things. All kinds of things. 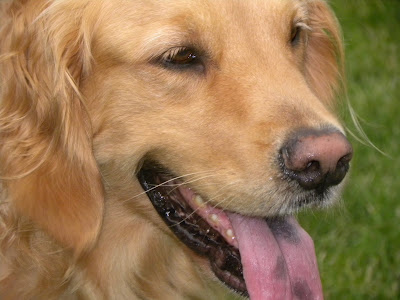 He is always ecstatic to see us when we drive in. We have a long driveway so we pull the trash barrels down on the hitch of the truck. We have to make two trips, and Jack goes through his whole prancing barking routine each time we come back for a new barrel….which is maybe three minutes later, he greets Ken like he has been gone for hours.

Not that we ever tried very hard, but this dog has learned nary a trick…not one, zilch,nada. Too dumb we’ve said. “Musta been dropped on his head as a pup.” Well then there is the tiny matter of the spinning. 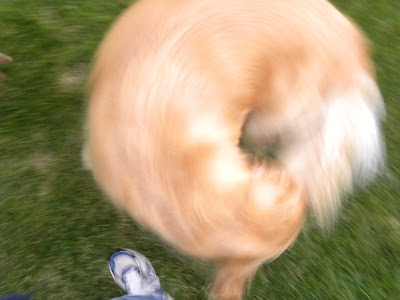 Jack will chase his tale until the cows come home. Quite frankly it makes me dizzy. We thought he would out grow it, he’s six, he hasn’t. He still chases his tale like it’s the first time. So all of this combined with many other things has earned him the title of dumb. I know…it’s horrible. We love him we really do. We have told him he was dumb more than I like to admit.

He’s a good dog though. Dumb as rocks, but a keeper. 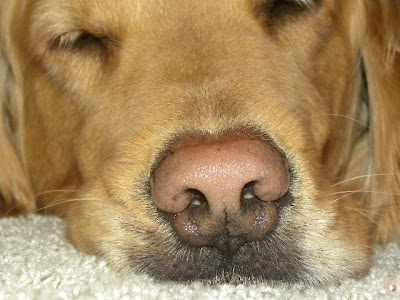 “They think I’m dumb as rocks, I’m just a sleeping genius.”
At night Jack sleeps in the house. Blocked in by the back door. There is no way he can see out the front of our house. It’s impossible from where he sleeps. Keep that in mind…….
Have I ever told you we live next door to Kenny’s brother and his wife? We do. Our properties butt up next to each others. They have a barn that is on their land, it sits in front our houses. My brother-n-law loves farming. They have some cows, and their kids have goats, chickens…fresh eggs. It’s kinda fun. My kids although they really don’t do much with the animals, love having this mini-farm right out their front door.
Jack, well….. he likes to race across the yard barking his fool head off at the cows and then come to a dead stop, and turn and walk quietly away. Goof ball….dumb dog.
Jack has barked maybe once in six years at night. So when we awoke to him barking like a maniac at a little after four in the morning Saturday morning, Kenny bolted out of bed to tell him to hush. But when he got up this is what he saw out our window…… 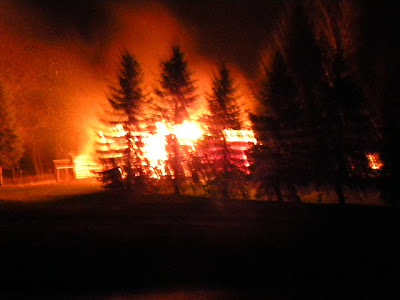 This is why, our “not so dumb” dog, who couldn’t see the fire, but sensed it, was barking his fool head off. With in seconds of Kenny getting out of our bed, he hollered for me to call 911 because the barn was on fire. He hollered for me to do it, because he was already on the horn trying to see if his brother was up. That’s how brothers are. Brothers first, 911 second. Brother was not up, he had to call again. I got 911 on the first try.

This was my first emergency call. I decided I don’t like calling 911. It’s scary. It made my armpits shoot streams of water out, so much so I probably should have just gone and put out the fire with my pits, and saved all those firemen guys alot of trouble. My chin was also quivering uncontrollably, making my teeth chatter…I wonder if the 911 operator noticed the teeth chattering.
When I told her how close the barn was to the houses, she calmly told me to stay on the line while I woke all my kiddos up and evacuated them from the house. I did as the nice lady told me. Thanking God all the while that I wasn’t rushing them out of a burning house…yet. 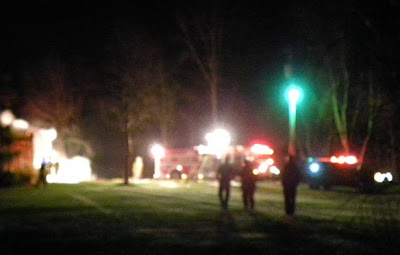 The brothers as all the fire trucks in the township arrived….
it seemed like a long time, but they actually got to us quite fast, considering we are on the far edge of the township. We are in one of those spots that confuses people. We are on the border line of two counties, and the edge of a township and just outside of the city limits. Who do we belong to? Of course this ran through my mind, what if no one wants to claim our little patch of land and the whole dad-blamed everything burns down while they decide which fire department to send our way. 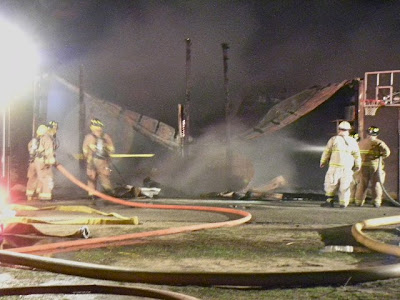 I had no need to fear because as this whole nutty four in the morning panic driven scenario was playing out in my head, they were already doing their job.

Which I might add is not an easy one. I am down right in awe of firemen. I am sorry to say, despite watching Backdraft fifty times, I still did not have a true feeling for how it all really goes down, and this was a barn fire. Not a house, or a large building full of people. These men were careful, calculated, compassionate, and they all worked there booties off. The last firetruck (there were 4 or maybe 5) didn’t leave until many hours later! 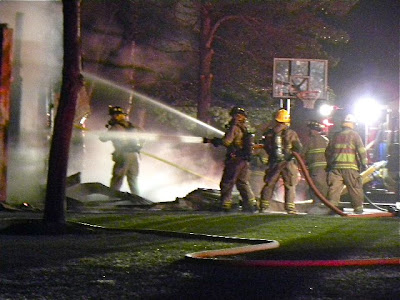 Because of how far off the road our houses and the barn set, they had to run hose all the way down the driveway and down the street to the corner, nearly a quarter mile to the nearest hydrant. Which meant shutting down the road. They had that hose out and pumping faster than you could say fire hose….or at least faster than I could have with my chin having convulsions. See the water blasting out of that hose? Imagine that same water pressure pumping out of your armpits……..

You think I exaggerate.
When it was all said and done. Nobody was hurt. Our families and our homes were spared. But my brother-n-law and his family lost all but 4 of their beloved animals, and lots of other things….that can be replaced, but that doesn’t make it any easier. 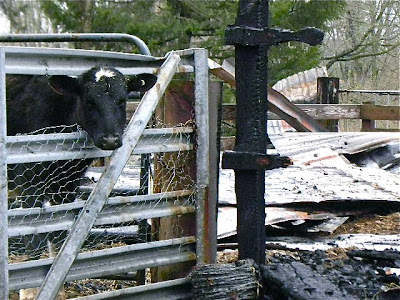 Sweet Moo-moo Cow what are you thinking? 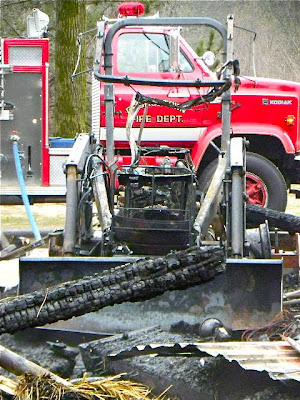 The boys shared this tractor….. 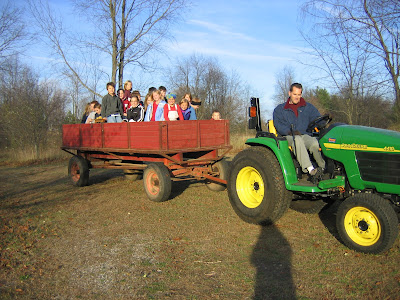 Many a hay ride was had behind this tractor. Memories. Good memories. 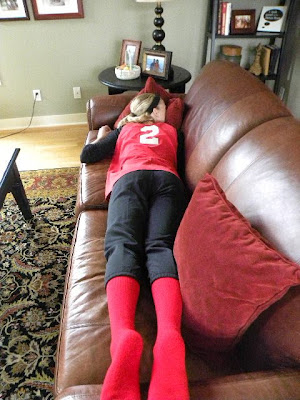 We all learned a lesson in our house this weekend. Well, we learned lots of lessons. But they all sort of are summed up by the old saying, “the show must go on”. As my daughter learned after being up half the night. Dead tired, but she didn’t want to miss her softball team pictures at 8:30 AM and then a her first game of the season to follow. Ugh…. 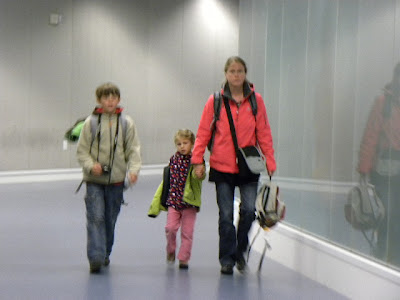 And well, then there was the minor detail of our house guest from France that were arriving at 10:45am. They were supposed to come in the night before, but there flight was canceled. Which I now see was an answer to prayer. What a bummer it would have been for them to arrive and be awoken to a huge roaring barn fire at four in the morning, their first night of vacation in the USA. 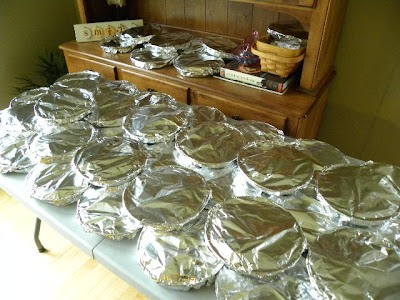 Oh golly…then there was the fact that we had baked all these cinnamon rolls Friday, and lots of people were going to be stopping by to pick them up. My brother-n-law had the driveway blocked because of snoopers…..I had to break the news that I had fortyish some people stopping by to pick up their rolls. I’m an annoying sister-n-law.

My eyes were burning out of my head with exhaustion, I wanted to put a sign on the door telling everyone to leave their moolah on the table and help themselves to the cinnamon rolls. But once I took a shower and washed the smoke off, and drank a pot-O-joe I was ready to face a new day. 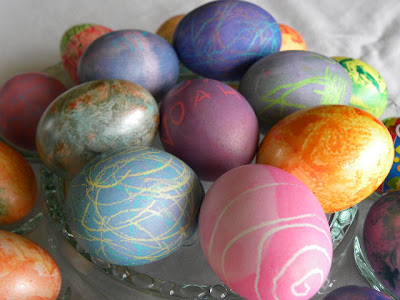 Which we thankfully were given. A new day to spend handing out baked goods to benefit the camp we love, a new day to color Easter eggs with good friends that arrived safely and well rested. 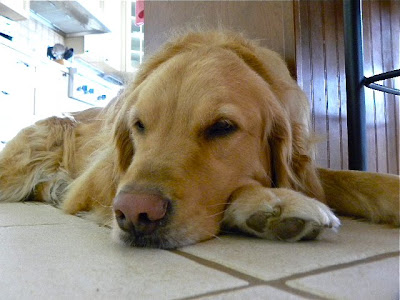 A new day to redeem myself with this dog, that I found out is not that dumb after all. He loves us unconditionally, and is apparently extremely tuned in to his surrounding. Although, one would have never known it, unless they lit a fire under his bah-hookie.
Luv Ya,