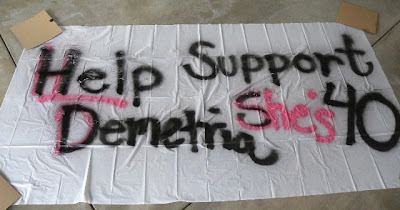 If you are not into people airing their dirty laundry….in other peoples front yards well then you might just want to move on to the next blog on your Google Reader. But you might want to stick around for this one, even if you think you’re not into that sorta thing.

Over a decade ago a good friend of mine from another city, we used to live, in pulled a very memorable prank on a friend of hers that was turning 40. It was hilarious, I thought. I couldn’t wait to do it to someone. But who? This was not the type of prank that just anyone would appreciate. It had to be the perfect, fun lovin’, gotta screw or two loose kinda friend. Someone like myself.
Ok if you are ready to be done with this story and just want the recipe feel free to skip my hilarious prank and go here for the Almond Cherry Scones. No hard feelings. 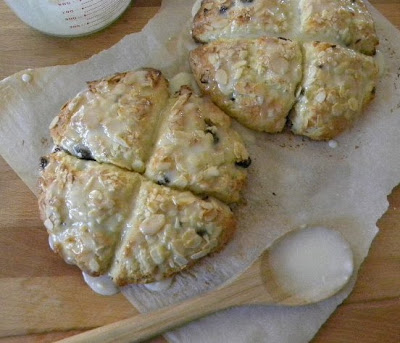 The prank involved collecting a large number of brassieres. Yes I said brassieres. Bra’s. Over the shoulder bolder holders(OTSBH). What ever you call them. I needed at least 50 to pull off this prank. Almost 10 years ago every time one of my OTSBHs needed to be replaced, I would toss it in a bag in my laundry room.
Girlfriends birthdays came and went. A couple times I plotted to carry out the prank, but it never worked out. The timing was always off.
Until a few nights ago.
You know my friend Big D? (Who is really quite little, but that’s another story.)
Well what do you know she just so happened to be turning 40! FINALLY, this was IT the chance to pull off the brassiere prank. And as luck would have it Big D’s neighbor was all about helping pull off this dastardly deed. Plus she contributed to the OTSBH collection as did a few other friendly neighbors, plus a stop at the Dollar Store, yes they sell bras, we ended up with 74 bras!
What does this all have to do with Almond Cherry Scones? Hold on I’m getting to that!!!!
Thankfully Big D turns in quite early for bed, but her husband does not. He had the house lit up like a Christmas tree. It was getting late (11pm) and Kristen and I were about ready to turn into pumpkins, so we decided to take the chance of getting caught and go for it. We tip toed in our head to toe black sneakin’ around cloths, cause as you know we sneak around at 11pm at night alot, NOT! As I was sayin’ we tip toed over and hung the sign on her front porch. 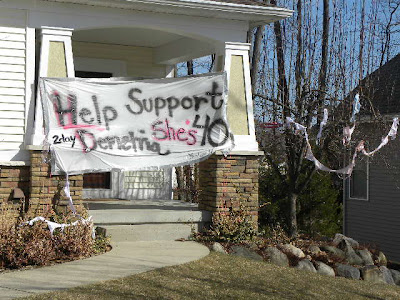 Then we proceeded to string bra-garland in the bushes, trees and across the garage door. We also hung them individually in trees.

Oh I haven’t had this much fun since I…..well we won’t go there now will we.
At one point I looked over and my accomplice had brought a ladder over and had leaned it up against a tree and was carefully placing the brassieres just so in the tree. For some reason this gave me the giggles.
Oh my Heavens to Betsy! Remember my bladder is old and giggling violently at 11pm is not advised….but I was able to get it under control and I continued sling shooting them, while she was being so precise. What a freeeaking riot. 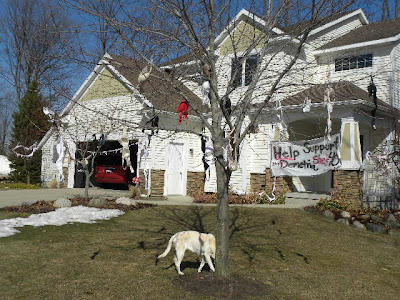 Good Golly Miss Molly! We got her good! I think my family, as well as Big D’s neighbors think I have a screw loose. Well they are wrong. I DO have a screw loose.
Big D loved it! She thought is was hilarious and refused to let her husband remove them from their yard. She wanted EVERYONE to know “Gol Darn It” that she indeed needed their support….because 74 brassieres was just NOT gonna do the trick on her 40th birthday!
Here is where the Almond Cherry Scones come in. Big D lover her some scones, and because I was feeling slightly silly and foolish and guilty about making such a spectacle of my friend and her family, I thought I owed her a very special treat. Please do try them they are scrump-dilly-icious! Recipe is HERE.
Let it be known I will air out my brassieres in your lawn on milestone birthdays.
Old Folks BEWARE!