The library in our town has a Kids Craft Fair every summer. Kids can come and set up a table/booth free and sell any crafts or pieces of art they have created. This summer three of my kiddos decided they wanted to participate. So as soon as school got out they started creating.
They were going to be millionaires after this craft show was over…..they were sure of it.
Kenny and I were praying that people would come and somebody would buy something…. anything…. just one thing from each kid would be good. Otherwise it was going to be a sad, sad day in our house after this whole Craft Fair thing was over. 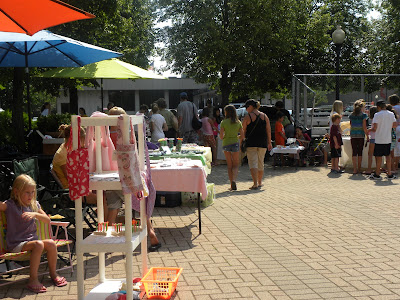 We were instructed that we could arrive at 8:30am to set up our booth. The sale was to start at 9:30am. It’s summer, we are night owls and like to sleep in. And I was thinking really how much time do we need, we can skid in there, set up 9-9:15am or so……..this statement makes it quite obvious that I had not been to this craft fair nor did I know the slightest thing, about anything at all, when it comes to such things as craft fairs.

It was a scorcher. (as in HOT) We arrived at 9am’ish. We had lots of stuff…I had three arteest with me mind you. It was a mad house! The Farmers Market was going on adjacent to the Library, so this caused a parking problem…AND WE, along with the sorry family that ended up with their table next to us, were the LAST people to set up.
And you know I have a particular problem with the perspiration! It was pitiful…..down right weird. Like I jumped in the pool with my cloths on and came to set my kids up at Craft Fair weird. My chitlins were so blasted excited to show their wears that they didn’t even mind their sweaty mama….at least I never got that vibe.
Well anyway, it was quite obvious that we had never done this before. It was a first come basis as to where your craft table was set up. The others had this thing down…they had there spot picked…plotted…..planned.
The best spots were closest to the Farmers Market traffic under the shade of trees. Next year I AM THERE…I will camp out in the parking lot if I have to. Just so I do not have to be stationed in the cement courtyard of the Library right in the blazing sun.
How many times did we hear, “wow you guys picked yourselves a hot spot!” that morning? A gagillion….that’s how many! And to top it off my Aunt Flow decided to come along with us…makes for a nice patient, even tempered mother of three crafty kids.
Which I must say were just happy to be there. They worked so blasted hard. So I had better shut up and show you their creations…… 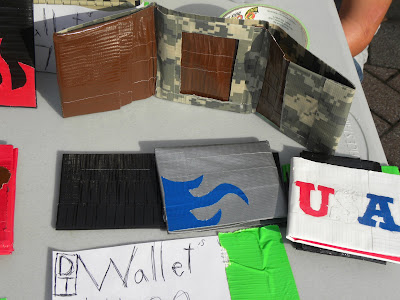 My youngest son made duct-tape wallets. Of all shapes, styles, colors, and sizes. They were really fantastic. He did them ALL on his own. After watching several YouTube videos that demonstrated the art of duct tape wallet making….it’s amazing the things you will find on YouTube. It was so fun to watch him keep his merchandise straight and smile and greet people, then he would show them his product. His wallets sold for $2-6.
We have suspected we had a budding entrepreneur in our midst, this particular morning I was positive that we have the next Bill Gates in our home….well possibly….I would never tell him that…wouldn’t want to give him a big head or anything.
He’s ten by the way….in case you someday read about this guy in the paper in like 20 years and then you think back and remember the duct tape wallet blog post you once read. Then you would do the math and go “hey I bet that’s that Strawberry Cake ladies kid!”. 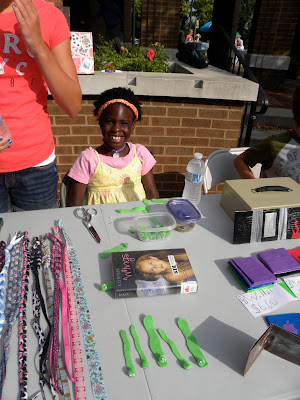 Then there was my littlest…she made felt bookmarks that looked like worms. They were pretty cute. They sold for 25 cents. She sold eight of them.

This was a lesson in economics for my kiddos too. They were suppose to keep track of their costs and then subtract it from their earnings and figure out their profit and all that good stuff. (as you can see I am real good with money lingo and math and things of that nature NOT, but I am hoping to give my kids fighting chance…also praying they received the full share of their fathers mathematical genius).
All that said, because she is only 8 and because she spent $3.50 on her materials, and only earned $2…I couldn’t bear to tell her she owed me $1.50. ( See I can do math.) So much to her brothers dismay we let the whole economics lesson slide for her. 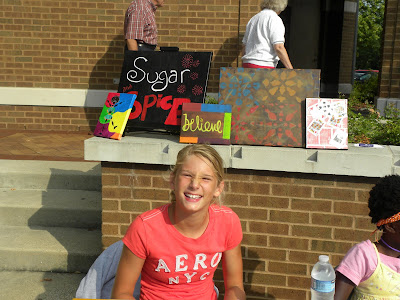 This is my oldest daughter. Budding artist extraordinaire! She bought these canvases on sale, and then we set up a table for her in the basement and she painted to her hearts content. For hours and hours on end. I really, really hoped that someone bought something from her, she had so much time and love invested in her paintings…..I really didn’t want her to have to learn the starving artist lesson at eleven. Her price range was $5-10. 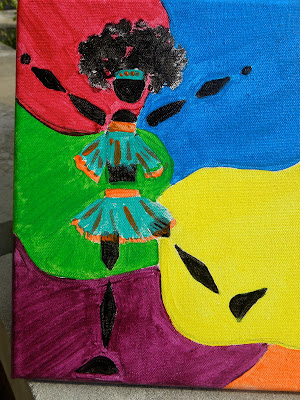 This was my personal favorite. It sold! As did 8 more of her paintings. 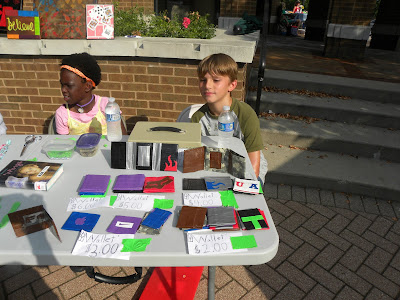 Waiting patiently for the next customer. 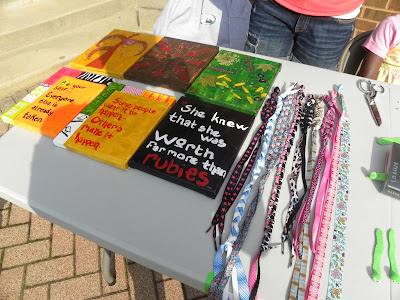 My big girl made head bands out of shoe strings too. Her Aunt Wendy gave her that idea, they were super cute! She made her sister model them for her. 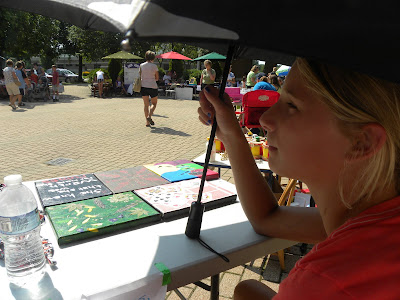 I finally ran to the van and retrieved the umbrella, so we could get some respit from the blazing sun.

Being the all supportive mother…I told the kids that it would be fine if they wanted to pack up early since it was so hot. But nope they wanted to stay until the bitter end. It was a good thing they didn’t listen to their wimpy mama, cause they made quite a few sales toward the end.
Of course I had to go take a gander at what the other kids were selling, and of course I couldn’t just pass them all by. 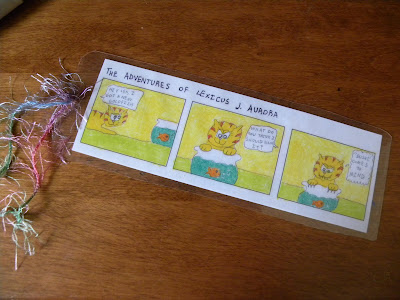 It was really fascinating to see what kids made. And in some cases what some kids moms made and passed off as there kids creations. Have you heard the term Helicopter Parent? Very interesting to see certain situations….that’s all I’m gonna say.

Here are some of the things we purchased. The above bookmark being mine. This little girl has made up her own comic strip, and she took some of them printed them and had them laminated. They were adorable.
The Adventures of Alexis and Aurora
“Hey lex, I got a new Goldfish” “What do you think I should name it?” (cat thought bubble) Sushi comes to mind.
I thought that was so cute and funny and I like Sushi, so I had to have it! 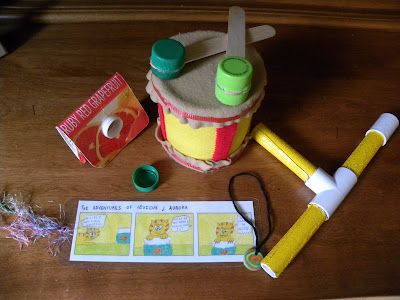 We also had to have the marshmallow shooter, a cute necklace made by a classmate of my sons, a coin purse made out of juice cartons…this one won the Unique Award from me, and we had to buy a drum from our neighboring table….little guys was dying of heat stroke we had to help him out somehow…and you never know when you are going to need a drum. 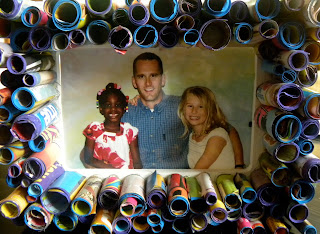 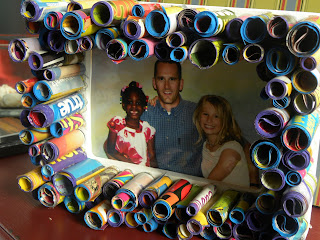 My big girl had to have this frame…she bought it with her profits. It is made out of rolled up pieces of magazine pages, stuck on a wood frame. Ingenious! It looks very cute in her room.
All in all this was a super experience for the three kiddos. We will do it again next year. And I will be there at 8:15 am getting the prime spot, mark my words. Thanks for letting me brag about my kids, hopefully you didn’t check out and go gag yourself. BUT now it can be your turn if you’d like PLEASE brag up your kiddos in the comments. I would LUV to hear all about them!
LuvYA,