Oooohh, sniff, aahhh do it again ooohhh, sniffff, aaahhh. These little babies smell so amazing. I try to make them every year. I hang them on my garland on the staircase, I put them in baskets in the bathroom. I tie them on gifts of caramel corn and cinnamon rolls, or what ever kinda gift, it doesn’t really matter. Tie them on a bottle of spiced wine! Ooh that’s a good one, I’ll do that. In the cookbook I have they are called Spice-scented Ornaments. I call them Cinnamon Hangy things………… I always have had a way with words…….I’m sure you can tell that if you have been reading my blog at all. 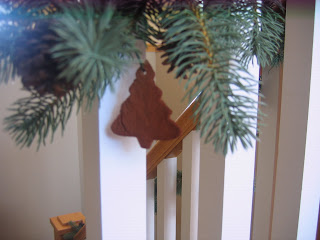 Once again my camera stinks so sorry about the fuzzy, glaring, picture. (if Santa brings me what I asked for, this possibly might improve after Christmas) So I would love to share the recipe with you….I am giving you the recipe doubled, and if I were you I would double it again. Not sure what they were thinking when they published it, because it would make approximately one and a half ornaments. It calls for lots of cinnamon so go to Costco or Sams Club and get your self some cinnamon, its so cheap there less than 3 bucks for a huge container.

1/3-2/3 cup applesauce PLAIN must have no sweeteners

Then you will need cookie cutters, extra cinnamon for dusting, straw or tooth pick, wire wrack for drying, glue if you want to embellish with sparkles or beads, ribbon to tie them on to stuff.

Mix all the ingredients together in a glass bowl, add 1/3 cup applesauce then gradually add the next 1/3 cup, (if you do it in plastic its fine but it seems to want to stick to the bowl) it is a very sticky messy dough, you need to use your hands and add a bit more cinnamon if it seems too stick when you get a good ball, then sprinkle some cinnamon on a hard surface and roll out with a rolling pin. They need to be rolled out quite thin, cut with your cookie cutters (I have found the smaller the better, wouldn’t advise using a cutter any bigger than three inches, if they get too big they break and are hard to transfer) then transfer to a wire cookie cooling type wrack, with a spatula. Make sure you DON’T forget to put your holes in for the ribbons, using a toothpick or straw. Then simply let dry. You will want to turn them every so often. It may take at least eight hours or a good day, so plan ahead. I just referenced my recipe and it says to let dry 2 to 3 days! Yikes I am not patient enough for that, 1 day is good. One last note, they will last from year to year, I pack them away in tissue with my garland.

I do hope you enjoy my 5th favorite thing!