What a spaz…..who was that lady?

Pioneer Woman Nazi??? Who says that? Like anyone associated with Ree or any lover of Ree, could be a Nazi in any sense of the word. Please accept my apologies.

Then the whole Scott Baio confession…WOW…that was chancy. So if you read yesterdays post and you are back today you must really want this cookbook bad.

By the way, if you haven’t gone to the Pioneer Woman’s site yet…today IS the day you might want to. She kinda sorta announced that they (as in Hollywood) are planning on making her book, (when she finishes it) Black Heels to Tractor Wheels, into A MOVIE!!!! Oh my, oh my…now my pits are pouring a river for Ree, GMA was nothing compared to this.

My silly girlfriend called me this morning, and said I had to get on The Pioneer Woman’s site and find out what was going on….The reason I call her my silly girlfriend, is she’s was talking like I had some part in this whole “movie” things because I am cooking through Ree’s cookbook! I am laughing out loud, right now.

Like… where do I fit into PW and Marlboro Mans love story?

That is just bust a gut funny!

She only commented once on my blog…we are not real life friends….but hmmmmm if I were to be cast in the movie…which I will not be….but completely whacked out, hypothetically, maybe if I were, who would play me?

OK, let us venture back to the real world, and talk about these calzones!

They were fantastic. Very meaty. Everyone in my family loved them. I even took some to the Recipe Party I went to. I cut them in fours so everyone could have a taste. They were a hit. 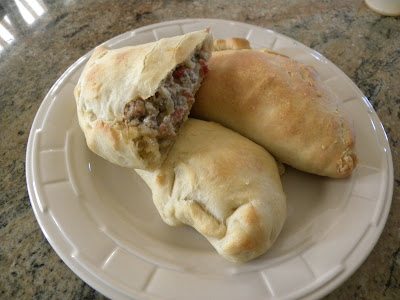 I said I would share the recipe I made, and took to the party….I will later. After this Sheila and Ree Project is done. I am looking forward to sharing some of my families favorites recipes with you. Until then it’s just me and P-dub!

I have to tell you I have been having computer problems….not sure why I feel the need to unload my computer whoas on you…but here goes. When I started this blogging thing we still had dial up.

Yes I said DIAL UP!

My computer connection was as slow as a slug in January!

To download a picture it took so long…I would do a load of laundry or vacuum a room as it downloaded. But now I have an air card….WOO WOO! Big hairy deal. If a plane flies over my bars take a dip and I loose everything I wrote! AAAAAaaah Waaahh. So, this happened to me the last two posts I wrote. I had them all written and Bye-Bye…Blip…they were gone! I have been stalking AT&T to try and get them to come back to my house. I live not far from civilization…in fact people 1/4 of a mile away have Comcast and U-verse and all that jazz. But because we don’t live in a neighborhood, and we live quite a way off the road they won’t come back to us….If any of you have some tricks or clues as to what I should do…I would be much obliged.

Comment for the chance to WIN! This signed cookbook could be worth some big-bucks after the movie comes out!!!

Have a great weekend!